So I learned a new word today; at about ten this morning a nasty wind kicked up, blowing ice crystals off the snow-covered mountains from the north down across the bay at storm force speeds. My captain called this a williwaw, which I looked up and found defined as “a sudden violent squall blowing offshore from a mountainous coast”. That’s definitely what I saw during today’s wind storm. Apparently he used to hear this word a lot in Dutch Harbor to describe the winds that descend upon Unalaska bay, throwing around shipping containers and knocking over huge dock cranes. I heard of this very thing happening when 100-mph winds hit Dutch just a month before I came to Alaska for the first time five years ago. I wasn’t so sure what I was getting myself into then! 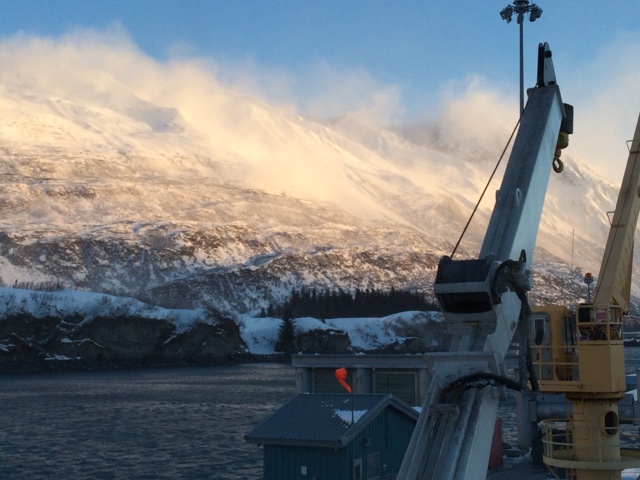 We were supposed to take fuel this afternoon but there was no way we were going to deal with lines and fuel hoses in 50-knot winds so instead we were put on an Alaskan tanker undocking as a fourth boat, using all available power to get the ship off the berth. I’m in the wheelhouse in the dark now and the squalls are still coming. It’s gone from northerly to easterly and is now blowing out of the south and southeast, and the barometer has dropped sharply since this morning. I’m hoping that it calms down soon, because the sound of the wind is unnerving as it rocks us against the barge where we are tied up at the container terminal and makes the stacks hum like a pipe organ.