The craziest things happened yesterday on my day watch! As I was eating lunch, the 2nd mate came into the galley and asked me to come outside when I was ready. I was figuring that they needed my help, but when I went outside, it turned out that there was a bird sitting on the deck; it was one of those fat little sea birds, like a puffin but with a beak and colors more like a penguin, and he was just chilling on the port side in the shelter of the bulwark. I guess he had crashed into the boat with the weather blowing the way it was – he looked a little unsteady. I fetched my camera from the wheelhouse then put on my work vest and proceeded to attempt catching him. He was quick, but too chubby to get away; he was probably full of food. He just flopped along, flapping his tiny wings. I chased him all over the back deck while the whole crew laughed hysterically – finally I caught him and let Steve take a picture before I let the bird go. He went bouncing away on the waves, looking back at the boat as he went – he must have been relieved to get away from us crazies. 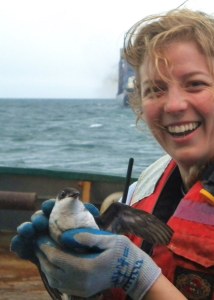 Not much later, I was in the fidley when I heard a loud groaning noise; I was pretty sure what the sound was before I glanced over at the tow winch. I watched it for a few seconds and when it slipped again I tore off through the galley and up the stairs to the wheelhouse. When I got up there I gasped to the mate that the tow wire was starting to slip. Without a second word he ran outside and down the deck to the brake. He was able to get more than another half-turn out of the hand brake. The loose brake combined with the heavy weather was pulling at the winch and causing it to let the wire out which could have been a disaster. Between the bird and the brake, I rather felt like I earned my wage today..